RCS was awarded the Amber Flag for the promotion of Positive Mental Health in 2017.

A big thank you to Ms. McCabe for all of her help in achieving this!!! 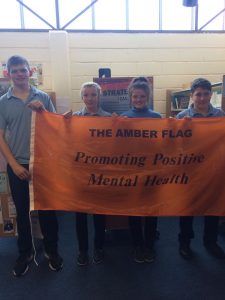 1. The school must establish an Amber Flag project team​. The names of
the members of the team shall be recorded on Form 1 at the
commencement of each schoolyear. This team should comprise a
cross-section of the school community but the majority must be
students. One staff member shall be named as the Co-ordinator of the
Amber Flag initiative. The terms of reference of the team should be to
promote Positive Mental Health in the school and should take
cognisance of roles already in existence in the school that may already
have an involvement in this area. Professionals such as Guidance
Counsellors and SPHE teachers have an invaluable role to play in such
matters and should be consulted prior to the formation of the
committee. It is up to each school to decide how the team shall
operate. Records of meetings shall be kept for evidence of the work of
the team.
1. Once constituted the team shall prepare an Audit of the activities and
services in the school that promote an ethos of Positive Mental Health.
These are recorded on Form 2.
2. The team should then identify 3 goals/tasks to enhance the existing
educational provision and support structures in the area of mental
health promotion in the school. These should be achievable in the
duration of one school year. A Mental Health Awareness Day must be
included as one of the 3 goals. This could be a fixed day each year.
These should be recorded on Form 3.
3. Once the goals have been agreed an Application for the Amber Flag
may be made using Form 4. There may be a small charge towards the
cost of producing and delivering the flag. This cost will be waived in
instances where a fundraising exercise in aid of the Amber Flag Project
is included as one of the awareness goals/tasks.
4. Once the Amber Flag committee is satisfied that you have completed
the 3 tasks, the Flag will be presented at the awards event and must
be flown outside the school building in a conspicuous place where it
will convey the caring ethos of your school and the importance it places
on Mental Health. Initially it is planned to hold an annual Amber Flag
awards event in May each year.
5. The team must then carry out its 3 goals over the schoolyear in which
the flag is to be presented. A number of suggestions to assist teams
are available in this guide but this list is not exhaustive and teams are
encouraged to develop their own ideas.
1. Schools must elect a new team at the beginning of each schoolyear
and outline its 3 goals/tasks for the next schoolyear on a new
​ The ​Amber Flag Initiative Promoting Positive Mental Health in Schools, Clubs and Organisations.
Application. This should be signed by the co-ordinator.

The best ideas often emerge from the team itself but the following are some
popular ideas.
1. Establish an Amber Flag notice board. This should contain the Amber
Flag and IGC logos.
2. Publish newsletter or use part of an existing newsletter to promote
Amber Flag activities.
3. Organise a Positive Mental Health Seminar in your school.
4. Organise a fundraiser for the Amber Flag project.
5. Establish a school Mentoring system where 5
th Year students mentor
1st Year students.
6. Develop a project idea to be carried out in SPHE or Transition Year.
7. Design a Poster Competition promoting the Amber Flag ideals.
Slogans might include A Problem Shared is a Problem Halved, Talk is
Cheap, Don’t Leave Town Alone, and so on.